Thumbs and Paws Up for Face Wrap

We are always thrilled when we come across a blog that sings the praises of our products.  Most recently, we came across Following Pips Pawprints, a wonderful blog that shares the life and times of a growing Border Collie.

Pip's owner, Barb describes in her blog that Pip had a bit of a barking problem and tried the Face Wrap.  Here is part of what Barb shared with her readers:

"I had heard good reports on this product called The Face Wrap. One of my colleagues had video of a barking Pom who magically quieted after the Face Wrap was put on. I had actually tried it with a client's dog who was a fearful barker and didn't have a lot of success with it, but I believe it's because the dog was already over his threshold when we put it on.

I have to report that it worked like a dream with Pip. A couple days before the workshop I desensitized her to it by feeding a liver treat whenever it appeared. Then I had her touch it with her nose and get a treat. Finally I laid it over her nose and fed her through the loop. When she was happy about seeing the Face Wrap come toward her, I criss-crossed it under her chin and snapped it behind her ears. Lots of treats then. She didn't fight it as much as I thought she would. When she laid down calmly with it, she got treats. When she fussed about it, I walked away.

During our workshop sessions when the dogs were crated, I alternated having her wear it and go without it. There was a definite difference when she had it on - she was calm and laid down during the sessions. When she wasn't wearing it, she was sitting up, staring at me and barking." 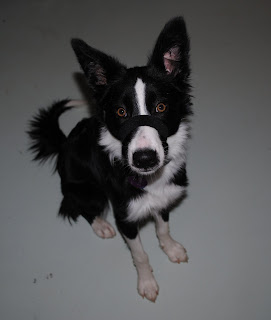 Pip looking happy wearing the Face Wrap
What a wonderful testimonial to the benefits of Face Wrap.  We would like to thank Barb for using Face Wrap and sharing her success with her readers.

We'll be following Pip and the adventures that growing up can bring!
Posted by Anxiety Wrap at 2:01 PM